WorldBlu, is an organization dedicated to developing world-class freedom-centered (rather than fear-based) organizations and leaders. Their vision is to see one billion people leading and working in freedom. Founder and CEO Traci Fenton has spent 20 years studying the effects of freedom in organizations and has come to agree with leading thinkers and scholars like Warren Bennis, Philip Slater, and others, that democracy in the workplace is inevitable because “it is the most efficient social system in times of unrelenting change.”

Traci and her team have just published the results of some interesting analysis in a report titled, Freedom at Work: Growth & Resilience An empirical analysis of how freedom and democracy in the workplace impact business performance. If you’re convinced, as I am, that corporate culture impacts business performance, then this analysis will be of great interest.

Each year since 2007 WorldBlu™ has published its list of Most Freedom-Centered Workplaces™. In that time, more than 130 companies in every industry that range in size from 5 to more than 60,000 employees from all over the world have met the standard to become WorldBlu™ certified. Companies like DaVita, Menlo Innovations, Glassdoor, WD-40, Great Harvest Bread Company and, yes, Zappos, all proudly claim to be cultures free from fear.

This report, Freedom at Work: Growth & Resilience, looks at WorldBlu™ certified companies and how they fared in terms of s growth and survival during and after the Great Recession of 2007. The data are impressive. S&P listed companies’ revenue growth rate during the 3-year period of 2010 – 2013 – the end of the downtown and beginning of the recovery paled in comparison to WorldBlu™ certified companies during the same period.

Additionally, the exit rate of WorldBlu companies during that same time period was less than half the national average. 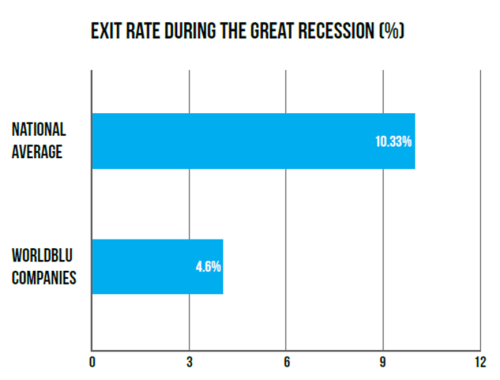 As the report states, 2007 – 2011 were bleak years for businesses and their employees. And many businesses around the world failed, closed their operations or sold out. Case studies from Menlo Innovations and DaVita are fascinating examples of organization leaders who take their commitment to culture several steps further than creating trust between leadership and employees. They truly approach their entire ecosystem in a democratic fashion and the results were significant. Take a look.