Jobs recovery? Not so much…

preparedness (or lack thereof) of the workforce in relation to the anticipated jobs growth in the United States. Anthony P. Carnevale and his colleagues have just published Recovery:  Job Growth and Education Requirements Through 2020. This is a follow up to their 2010 publication, Help Wanted:  Projection of Jobs and Education Requirements Through 2018.

The bad news is that the educational preparedness of the U.S. workforce is getting worse as we look to the future. Without systemic changes to the U.S. post-secondary education system, the economy will now fall 5 million workers short with post-secondary degrees by 2020 – an increase of 2 million from their projection of a 3 million shortfall in 2018.

While many sources are predicting that the U.S. economy will create 55 million new job openings over the next decade, these new job openings are a combination of an anticipated 24 million newly created jobs and 31 million openings created by Baby Boomer retirements. Foundational to the calculations are that jobs are returning much more slowly that we thought they would following the recession. 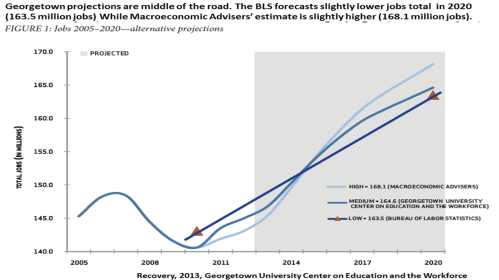 Still, an increase of 24 million new jobs between now and 2020 seems hugely optimistic. That’s an average of 307,000 new jobs per month between now and 2020. When has the U.S. sustained that kind of consistent job growth? Well, according to Bureau of Labor Statistics, in the last 30 years, only 1994 averaged new jobs creation at a rate of over 300,000 per month. 1994. A long time ago.

But there’s more from this report that’s worth noting for those concerned about the future of the talent pipeline: 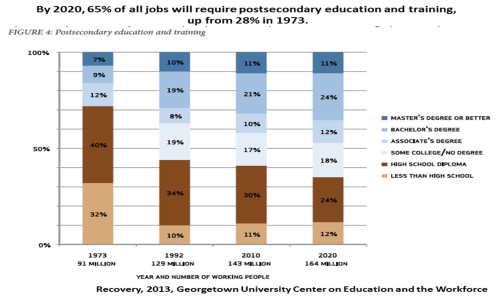 The implications here are clear regardless of the numbers of new jobs created: employers and others predict that soon nearly two-thirds of all jobs will require some kind of post-secondary education or training. In 1973 – just 40 years ago – less than one-third of all jobs required the same. Forty years isn’t a very long time – just one generation. Lots of change in the nature of jobs, work, education, skills and employability in 40 years.

The Center on Education and the Workforce generates useful information for those involved with education and/or workforce planning – functions that should joined at the hip today and in the future.

Big Trouble in the Talent Pipeline

I’m not generally big on infographics.  I find them self-serving and hard to read and digest.  Here’s an exception.  It’s called Unprepared for College and was posted on the College@Home.com blog.

I’ve written about the non-performance of the U.S. education system in preparing our future workforce here and here.  This infographic puts the issues front and center.  I don’t see how we can continually turn away from this data.

But wait.  It gets worse: 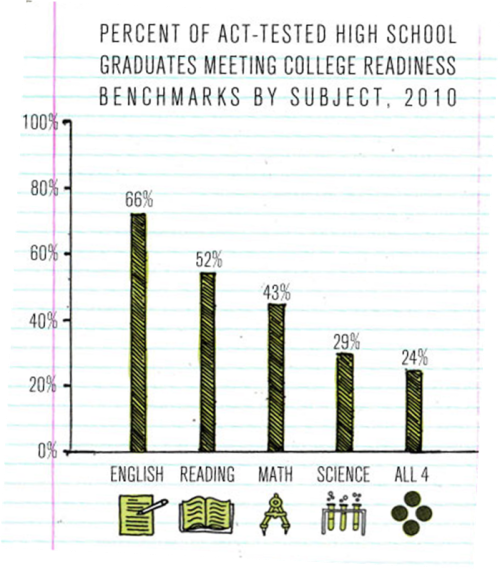 And then there’s this:

The bottom line?  Only 56% of students enrolled in a 4-year program receive a degree within 6 years.

So.  What are we doing about this?  Government can’t or won’t act.  We can blame teacher unions, local governments, state governments, the voting public, parents, the students themselves – but none of that helps solve the problem.

Seems to me that business in general – and HR specifically – needs to step up to the plate.  After all, we’re the ones most concerned with the unskilling of our populace.  We’re the ones who know the most about the kinds of skills we need today and the kinds of skills we’ll need tomorrow, and next month and in the years to come.  I think it’s up to us.  What do you think?