Where Do Candidates Come From?

There is a robust conversation in the talent arena about “candidate experience” led largely by Gerry Crispin and Elaine Orler, founders of the Talent Board and the Candidate Experience Awards (#CandE). There are lots of opinions about whether ensuring that candidates for hire have a high quality experience is meaningful. Some think the juice isn’t worth the squeeze. But I think most believe treating candidates like consumers is smart business. Two new vendor publications discuss aspects of candidate experience:

Both reports were published within the last month and contain analysis of current data. The Rolepoint whitepaper was written by global recruiting legend Bill Boorman. It highlights Intuit’s approach to embracing a social approach to the apply process, with a particular focus on making the application process streamlined and device agnostic “with equal attention paid to user experience and interface on both desktop and mobile.” Bill is a legend for a reason and his approach to this topic in the whitepaper is compelling. The Smashfly presentation provides insight into the employee/candidate referral landscape with some interesting data:

This survey data is interesting, and I key in on the 4th bullet. Extending referrals into other stakeholder groups makes a great deal of sense – and correlates to higher quality candidates. Take a look below:

If you’re in the 23% of employers without a candidate referral program, this might be a wake up and smell the coffee moment. If you’re in the 57% of organizations limiting referrals to employees only, this might be a pedal to the metal moment. Either way, whether you’re recruiting programmers, developers, customer service agents, nurses, marketers, HR professionals or executives, approaching your trusted partners – including employees – for referrals makes good, logical sense. And treating potential candidates like consumers, that is, making it as easy for them to press the “apply” button as it is to press the “buy” button seems like a tenant from Econ 101. Check out these reports from Rolepoint and Smashfly. 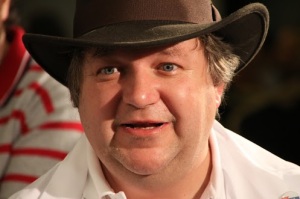 Two years ago I wrote about my first TruLondon unconference experience.  Read it here.  I called it The King of All Social Recruiting. It was less about the event and more about Bill Boorman, the conference  “disorganizer.”  I’ve just attended and led a track at TruLondon6 and I have to say it was another Bill Boorman Tour de Force.  This guy just doesn’t stop innovating.

Bill innovates like you and I breathe.  I don’t know how else to describe him.  For instance, at this unconference he enticed a major new sponsor to underwrite the first ever conference-based live streaming Google+ hangouts.  The first.  Ever.  The good folks from Kelly OCG’s EMEA team underwrote the filming and live streaming of “hangouts” – discussions, really – live streamed on Google+.  Kelly OCG had thousands of viewers to this unscripted, captivating content – challenging and fun conversations with thought leaders from around the world on topics that ranged from “should leaders manage the different generations differently?” to a

presentation and discussion led by the CEO of Stack Overflow, Joel Spolsky.  Some of the hangouts were social media focused, some were recruiting focused, some were just cool conversations by really smart people with expertise and opinions about the state of talent acquisition and development.  These were happening simultaneously with the three tracks of group discussions (not filmed or streamed live) in each time block.

At the same time, Mervyn Dinnen from JobSite recorded and live streamed interviews with many of the notables in attendance.  John Sumser and I had a fun conversation about whether or not there really is a talent or skills shortage.  Check out the JobSite channel to see the recorded interviews.

John Sumser, Gerry Crispin, Crystal Miller and Heather Bussing led fascinating group discussions and challenged the attendees to share, learn and think differently.  As a track leader, I learned as much from the colleagues in my discussion as I hope they learned from me.

I have to say it was entertaining, fun – and I really learned a lot.  Just what I want from a conference – or unconference – experience.

If you get the chance to attend one of Bill’s Tru events – and they’re all over the world now with stops coming up in Amsterdam, Zurich, Cape Town, Hong Kong, Singapore, New Orleans, Seattle and lots more – you really need to do it.  Leave your “normal” conference experience expectations outside, though.  This will be a conference like no other you’ve ever attended.  And you’ll be smarter for it – and your network will have grown exponentially with innovators like Bill Boorman.

Well, not really like Bill Boorman — there’s only one of him.