As HR and other leaders grapple with high turnover rates among the Gen Y cohort (see last week’s post here), all kinds of issues get raised. Is the turnover due to “special” characteristics inherent in Gen Y? Is the turnover due to lack of education and training opportunities? Naivete on the part of Gen Y – the world of work doesn’t match their expectations? Could a lack of thoughtful onboarding play a part?

The Aberdeen Group published Onboarding 2013: A new Look at New Hires last month and author Madeline Laurano provides data that might help organizations become more effective in retaining the youngest of their workforce.

First of all, Aberdeen reports that only 37% of employers have invested in a formal onboarding program for longer than two years. Surveys report that it’s difficult to quantify the ROI on formal onboarding programs so “basic orientation” activities are used in substitution. Socializing new hires into the organization’s culture is popular, but hard to measure. And so, “onboarding programs have fallen short and become little more than a transition from recruitment to employee development.” Interesting.

But attention is starting to be paid and, surprise!, it’s all about productivity. One of the quickest routes to ROI is the improvement of productivity and that’s something organizations can measure. Other drivers for looking at new ways to onboard new hires include improving employee engagement, reducing turnover and improving new hire assimilation.

But, as the graph below shows, there’s lots of opportunity to make onboarding programs more robust, strategic and productive by spending more time. 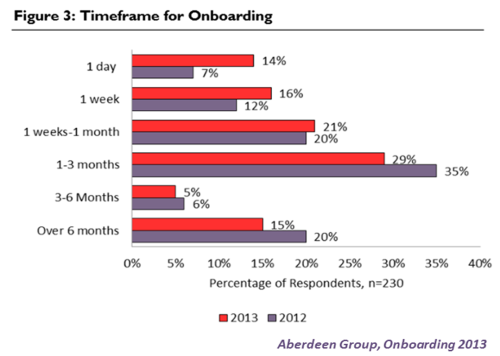 And it doesn’t have to be rocket science! The kinds of strategies being used to drive stronger onboarding programs include the following:

But the real key appears to be creating a bridge from the candidate experience to learning/development and performance management. After offer acceptance, Best-in-Class employers are more than twice as likely than all other organizations “to integrate data from onboarding into performance management, providing key stakeholders with development plans of new hires and to tie the source of a candidate to their performance as an employee.”

But still, only 26% of Best-in-Class employers enroll new hires in learning and development programs compared to 11% of all others. Hmmm….

Think about these as you and other leaders in your organization wrestle with the high turnover rate in your Gen Y employees. And take a look at this report.

Aberdeen Group reports are very easily consumed. They’re written in normal English and have an easy to understand structure. Even if you can’t spend real money to make your onboarding program more productive, you can certainly get smarter about what works and make some adjustments based on data to improve your outcomes. That’s the whole point of research, right?

Accenture recently published its 2013 College Graduate Employment Survey Findings. Lots of great data. Especially if you plan to hire recent college grads. In fact, some of the data are surprising.

One of the important takeaways is that employers have unrealistic expectations for the skills of the hires they make out of college. They think these young people should be able to hit the ground running and are surprised and disappointed when they don’t. And to compound the problem, these employers are not investing in training initiatives to get the newly hired up to speed in the short term or effective in the long term. This is all pretty logical. It’s good data and if you plan on hiring entry level employees from the ranks of the newly graduated, you should read this.

But here’s what caught my attention. It’s about the willingness to commit. And it isn’t the first time I’ve seen data like these.

Young people, entering the economy for the first time, want to commit to their employers. It’s not what we expect, I know. We expect these youngsters to be gone in the career equivalent of sixty seconds. And sometimes they are. But it’s important to know that that isn’t what they want! This isn’t what they expect! 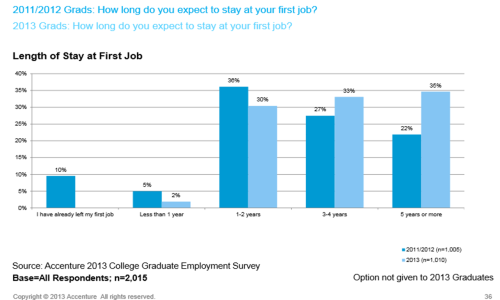 And from the Achievers Class of 2012 white paper:

But the BLS shows us what happens once they join our organizations:

So, young people entering the economy for the first time with a newly minted degree are filled with optimism and have every intention of committing to their first employer for 5 years or more. Is it naivte or is it a real desire to commit, belong and make a difference?

And what happens once they start that first job that impels them out the door in 18 months or less?  Are employers so inept at selection that they really can’t hire employees that will persist? Are young people so naïve that they don’t really know what they’re signing up for and leave when reality doesn’t match expectations? Or, as the Accenture survey suggests, are young people disappointed when expected training and development doesn’t materialize and they leave in search of greater learning opportunities?

Clearly this is a complex issue with lots of dynamics, as the Accenture survey results show. However, if we started with the belief and understanding that young people really do want to engage and commit to their employer, would we be more likely to invest in developing their skills?

If we started with the belief and understanding that young people really do want to engage and commit to their employer, would we create onboarding processes that ensure expectations – on both sides – are being understood and met?

If we started with the belief and understanding that young people really do want to engage and commit to their employer, how would we approach them differently?

I suspect that most employers believe that there’s no return in investing in a talent pool that will be gone in 60 seconds.

I further suspect that the EVP that is sold in the recruiting process doesn’t exactly come to life once the recruit joins the organization.

But I suspect that the real issue is that Gen X and Baby Boomer managers, supervisors and recruiters believe all the negative stereotypes about Gen Y and their lack of commitment to any agendas other than their own — despite multiple data sources that show just the opposite. And we’ve ended up in this tough reality that has become a full-fledged self-fulfilling prophecy.