Use of Technology at Work: Counter-intuitive Findings

A recent Pew Research Center report examines the impact that technology has on workers and provides some counter-intuitive data. “Digital Life in 2025: Technology’s Impact on Workers” looks at a representative sample of adult Internet users and the role or impact of digital technology on their work lives. The report helps to identify the role of technology in different areas of business, what certain workers find most valuable, and provides surprising perspective on the discussion of whether technology is keeping employees productive, or spreading them too thin and negatively pressuring them to stay constantly connected or “plugged in.”

Among online workers, the Internet and email are deemed the most important information and communication tools, though it may be surprising that social media was ranked very low in importance. 61% of American workers who use the Internet stated that email is “very important” for doing their job, while 54% said the same about the Internet. Only 4% reported that social networking sites like Twitter, Facebook or LinkedIn were “very important” to their work. 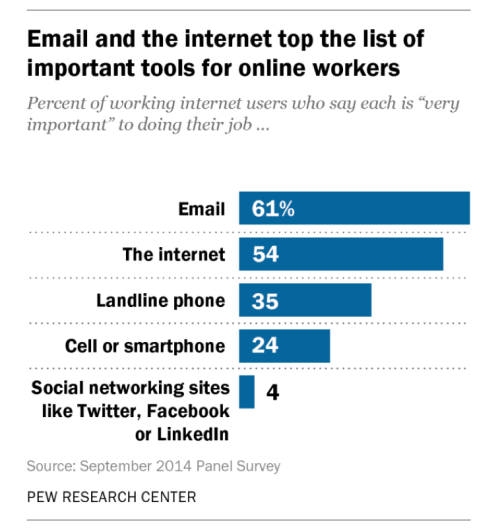 It may also be surprising that for online workers, landlines outrank cell phones in use and importance. 35% of workers surveyed say landline phones are “very important” to their work, compared with 24% who say the same about cell phones. Internet and email are ranked as highly important for those that work in traditional “office jobs,” and ranked as critical for the 59% of employed adults who work outside of the office at least occasionally. 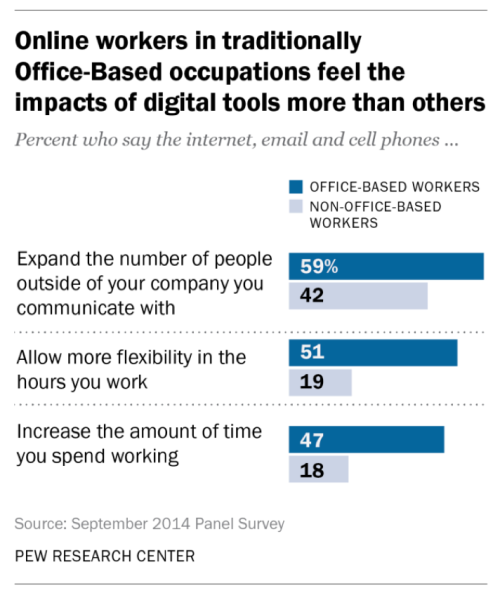 Many employers are being proactive regarding the perceived tendency for the Internet to “distract.” 46% of workers surveyed state that their employer blocks access to certain websites, and have rules about what employees can say or post online (a figure that has more than doubled since 2006). Despite this, 18% of working adults report being unaware if their employer blocks sites and 27% are not sure if their employer has rules about what they can say or post online about their workplace. On the flipside, 23% of working Internet users report that their workplace encourages them to promote it online, and 59% say this is not something their workplace encourages them to do. Overall, Pew Research’s data show that more and more employers are implementing policies – “social media policies” – covering what employees can or cannot say about their employers online. 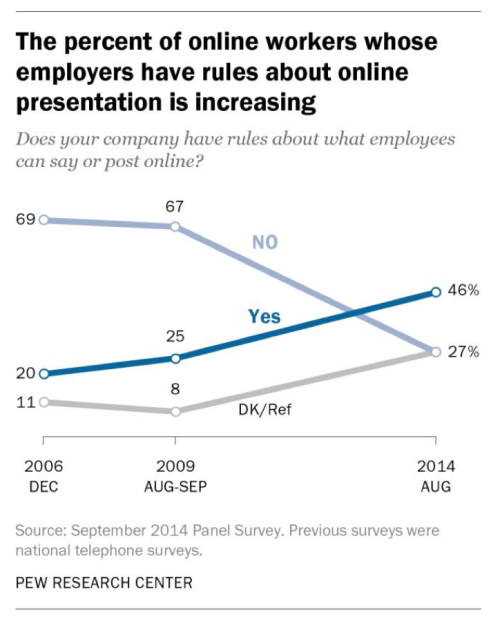 While we seem to read daily about the threats of digital technology from hacking and spam, phishing scams and warnings about loss of productivity and work/life integration, this data indicate that email remains just as important and used by American workers as when it first became of workplace tool, and is likely to continue to be a vital tool across the workforce. Pew Research Center’s report highlights that employee productivity may not be as negatively impacted by distractions from the Internet as some managers assume, but rather points to some other potentially problematic areas that organizations should be conscious of as they continue to increase their use of technology. Specifically, these concerns include the difficulty from employees in being able to “unplug,” as workers report the Internet and email are reasons for an increase in the numbers of hours they work. Additionally, organizations should check in with employees about their social media/internet policies. If they have policies in place, are employees aware of them? If organizations don’t have policies in place, giving thought about how to provide guidance to employees may be warranted – especially for organizations that are heavily dependent on technology and the internet.

More than anything else, this report should cause us to consider whether, in fact, email is truly dead – as many Millennial watchers believe; whether everyone is dying to use their smartphones at work, and how big a productivity threat popular social media sites really are. Admittedly, this survey’s sample was not enormous, but a 95% confidence rate might provide motivation to take a closer look at the impact technology is having on the productivity, work/life integration and lives of our employees.

Is HR Mad for Social?

Monday and Tuesday in the U.K. at TruLondon; Wednesday in Dublin at the Kelly OCG Talent Strategy Summit; and Thursday and Friday in Amsterdam at the HR Tech Europe Conference. Hanging with HR Professionals from Europe, the Middle East, Asia and North America. Focused on the

challenge of increasing the productivity and efficiency of organizations by managing talent better. A global challenge, surely.

The talk at TruLondon was focused on making talent acquisition smarter, more social (because that’s how talent operates today), and more effective. (You can read my take on the conference here.)

The conversation in Dublin was more general, but the use of social technologies was a central thread.

And social was front and center throughout HR Tech Europe – whether it was in keynotes by thought leaders like Thomas Otter, Naomi Bloom, Peter Hinssen  or Josh Bersin, the iHR competition where 6 emerging tech based HR solutions companies vied for the coveted “best new HR tech company,” or as many as 10 (out of 52) breakout sessions that had “social” in their titles.

It made me wonder: is HR mad for social? Every conversation I had in London, Dublin and Amsterdam touched on social – either in discussing conference content or in casual, more personal conversations.  A sample of things overheard:

Frankly, I knew for sure that HR is mad for social at HR Tech Europe when a session leader, a senior HR leader from a French firm, used an image of a kitten with the following caption: “please adopt me.” (HR + kittens = done deal.)

I don’t think that focusing on social technologies to help support HR in making bigger impacts in talent management challenges is a bad thing. We just have to ensure that we are being data-based and  strategic and not just focusing on the next new shiny object. We must ensure that any new solution we introduce into our organizations does 3 things:

Unless the myriad of solutions coming to the HR/Talent marketplace with social features can do those three things, they may well be just shiny objects mewling like kittens to be adopted.

Unless the myriad of solutions coming to the HR/Talent marketplace with social features can do those three things, they’ll do nothing to increase HR’s ability to lead the necessary strategic  workforce and talent planning actions.

Unless the myriad of solutions coming to the HR/Talent marketplace with social features can do those three things, HR won’t be able to fund them, much less implement them.

The discussions in London, Dublin and Amsterdam were engaging – whether in casual conversation or from behind the podium – and will lead the way for increasing HR’s impact on business performance and growth. And that’s just where HR needs to play:  improving business performance through the greater productivity of talent.  If that isn’t the focus, then social becomes a distraction and a waste of time, energy and money.

Then we won’t be mad for social – we’ll be mad at social. And rightfully so.

This is easy.  The answer is not just no, but hell no!

Despite the fact that Human Resources – Personnel, back in the day – has its roots in risk avoidance through an overarching focus on compliance,  today HR is at the forefront of early adoption – especially with respect to human capital management software.

I’ve written a white paper for Achievers (www.achievers.com) that will be available shortly.  And the great HR Technologist Himself, Steve Boese, and I will be discussing this very topic in webinar on March 7 at 1:00 pm EST.  Register here to join us.  I’m thinking that this could be an epic point/counterpoint discussion that you won’t want to miss!

Plus, you’ll get a complimentary copy of the white paper, Early Adoption:  Against HR’s Nature?

Steve Boese and me, an interesting webinar that will straighten your spine and put a swagger in your step, a free white paper and Achievers.

Be there or be…I don’t know, ummm…Personnel.