The June Monthly Labor Review published by the Bureau of Labor Statistics (U.S. Department of Labor) had an interesting article about the surprising impacts of telecommuting in the U.S. workforce.  Surprising because the data analysis show that telecommuting hasn’t taken hold to any

strong degree in the U.S.  And where it has taken hold, the impact isn’t positive:   from an employee perspective, the data suggest that the impact of telecommuting is negative from a work/life integration view!

Wait.  What? Isn’t telecommuting the perk that allows employees more flexibility and balance between work and personal life?  Well, no.  The data suggest not so much.

The Hard Truth About Telecommuting, by Noonan and Glass, says:  “telecommuting appears, instead, to have become instrumental in the general expansion of work hours, facilitating workers’ needs for additional work time beyond the standard workweek and/or the ability of employers to increase or intensify work demands among their salaried employees.”

The average number of hours worked per week from home by telecommuters is small.  And hasn’t been growing to any great degree since the mid-1990’s.  What is interesting is that most of telecommuting hours are overtime hours – they aren’t replacing office hours, they appear to be growing overtime hours.  So while more and more employers tout their “work-flex” telecommuting policies, the percentage of workers who telecommute isn’t growing.

Also surprising, is that younger workers are not telecommuting any more often than more mature workers and parents aren’t telecommuting more than the population as a whole! 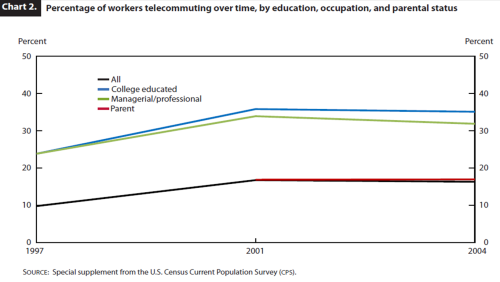 The big value of telecommuting, according to this report, appears to accrue to a very few higher level professional employees.  For the rest, it actually appears to encourage longer work weeks.  As the report surmises, being available to telecommute may actually allow employers to increase expectation for work availability during evenings and weekends encouraging longer workdays and workweeks – the exact opposite of the intent.

It might be interesting to take a look at your organization’s use of telecommuting and determine whether this “flexible” approach is creating more or less stress, more or the same hours, more or the same productivity – and if it’s being utilized effectively.  In other words, is it an ineffective perk that feels good to offer and merely looks great on the “best” lists or is it a productivity and engagement tool that is actually producing value for your workforce?

The U.S. Department of Labor/Bureau of Labor Statistics is a gold mine of information.  It crunches massive amounts of data having to do with labor and the economy, and is prolific in providing projections for the future.  (See previous posts here and here.)

An interesting monthly publication put out by the BLS is the Monthly Labor Review.  The January edition included an Overview of projections to 2020 based on its Employment Outlook 2010-2020.  The overview contains a review of the underlying data behind all of the BLS’s projections.  Labor force participation by demographic, the connection between GDP and productivity, job growth by sector/industry, job growth by occupation, job growth by education level – all are included in this overview.

What I found most interesting was a graph and brief discussion comparing the most recent recession and the resulting time to labor market recovery to the previous four recessions.  Take a look at the graph. 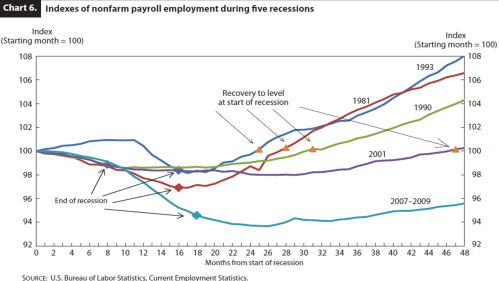 The real question is, why is this recovery taking so long compared to the previous recoveries shown in the graph?  Labor market analysts discuss the cyclical vs. structural causes that continue to depress hiring and job creation.  Cyclical unemployment occurs when workers are laid off because of weak demand, but who expect to be re-hired when demand picks up – usually by the same organization, and usually in the same occupation or industry.

Structural changes in the economy also create job loss – our most recent recession proved that unequivocally.  Structural unemployment could also be caused by weak demand, but is fundamentally caused by other dynamics that impede workers’ abilities to return to work when demand picks up.  For example, new technology and resulting productivity gains may reduce the need to rehire workers with less current skills and may reduce the number of workers needed even after recovery.   As time goes on, the skills deficit of the structurally unemployed gets bigger and so they may well experience longer periods of unemployment.  Retraining in new occupations will be required for these workers in many cases.  Sound familiar?

As HR and talent management professionals take into account the impact of both cyclical and structural unemployment in their locations and industries, their approach to creating a robust talent pipeline will be far more realistic and attainable if they focus on causes of structural unemployment.  Just as employers are having difficulty finding the skills they need, the structurally unemployed are having difficulty finding new homes for their outdated skills.

Surely the answer is obvious to more than me.